It is often desirable to have a source of fluid streaming at a tuneable flow rate but common solutions present different kind of issues that are not often well understood by their users. This article series will investigate various technologies with all kinds of complexity. We will begin our journey with gravity flows.

Gravity flows uses, as their name suggest, the natural force of gravity to produce a stream of fluid. In its basic version, one fills a tank with a liquid and let the gravity pulls the fluid down to some tubing: 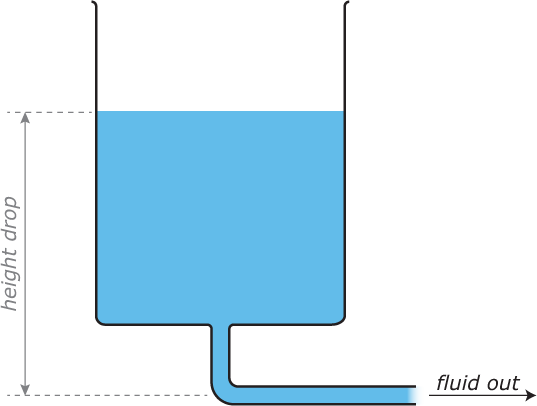 A variation of the system, the siphon system, is to place the tubing by the top of the tank such that some part of the tube is above the liquid. However, this requires the tubing to be primed with some fluid.

Let's now get back to the traditional system where the tubing is connected from below. What makes the fluid move is the hydrostatic pressure which is a function of height (h [m]), gravity (g [m2/s]) and density of the fluid (r [kg/m3]): P = r*g*h. Every fluid has a static pressure, even the air around us. You may not have realized it but, at sea level, the column of air above your body weights about 1 kg/cm2! If we are not crushed into the ground, it's because air also pushes from below and all we would notice is the difference in pressure (dP) resulting from the air pushing above us with the air pushing below us on a short distance dh, dP = r*g*dh.

So far all that pressure is contained in the fluid tank and only wants one thing: to be freed. If we make a small hole in the tank, the fluid column above that hole will push the fluid through it. The higher the static pressure above the hole, the faster the fluid will be ejected. This is classical Newtonian mechanics with a body having potential energy (by hanging at some height) which converts to kinetic energy. Actually, the hydrostatic pressure we have seen is a form derived from energy. In the case of fluids, the kinetics pressure is half of the density of the fluid times the square velocity of the escaping fluid (v [m/s]): P=r*v2/2.

Assuming a perfect transfer from potential energy to kinetic energy, we may equate both terms to get the velocity of the fluid leaving the hole at some height h: r*g*h = r*v2/2, and then

Alternatively, we may obtain the flow rate (Q [m3/s]) by multiplying the velocity of the fluid with the internal section of the hole (A [m2]) : Q = A*v.

By connecting a tube to the hole, we make our first pumping system that solely acts on gravity. The driving force being the height difference between the top of the fluid level and the arrival of liquid at the end of the tubing. The flow rate at exit is proportional to the diameter of the tubing and the square root of the height difference. By adjusting these, we may get the desired flow rate.

But what if we want to tune the flow rate? We cannot simply change the fluid or the tubing diameter during operation...

The solution lies in the assumption we have made earlier, that the potential energy is completely transformed into kinetics energy. This is almost never true as fluids usually have some viscosity (unless you are working with liquid helium at -270°C!). Viscosity causes friction where the fluid is in contact with the boundaries and friction causes energy loss. Imagine a large rock on a sand bed, to put it in motion you have to use a lot of energy from your muscles to push it. The same is true for fluids. Coarse material, complex shapes such as edges etc. all make great friction. If we sum up all these frictions in a general term e with the units of pressure, we may say that the flow rate is equal to:

Because the potential energy is partially lost with the viscosity of the fluid. Unfortunately, the mathematical expression of e is difficult and depends on the kind of friction taking place (friction at edges have a different behaviour than friction along some tubing distance). Usually, the energy loss depends on the viscosity of the fluid, its density and its velocity at some power b (1 < b < 2 for most cases): k*vb with k a function of fluid density and viscosity.

However, as we are not interested in a deep understanding of the friction phenomena in fluids but more in its overall effect, we may use an element that whose purpose is to modify the friction e: a valve. The easiest valve you can think of is a portion of tubing where you introduce a conic needle in the stream flow to make a variable resistance to the flow. The deeper you put the needle, the more resistance you get. As large resistance means large value of friction e, the valve allows you to tune the output flow rate of a liquid stream driven by gravity.

In practice there are several valves technologies which let the user change the output flow rate more or less linearly. All we have to understand is that valves are elements that let us tune the flow rate but that they require prior calibration. Small valves are common elements in DIY stores but you have to pay attention that they will not be corroded by the fluid you are using.

But wait... We have seen that the flow rate is proportional to the square root of height drop but what does happen when we draw the fluid from the tank?

The answer is easy: drawing fluid from the tank will make the fluid level in the tank drop and, as a consequence, will decrease the flow rate until it reaches zero because the tank is empty. This is kind of a problem for a steady source of stream flow!

A clever solution is to seal the tank and use a second tubing to fix the pressure in the bottom of the tank: 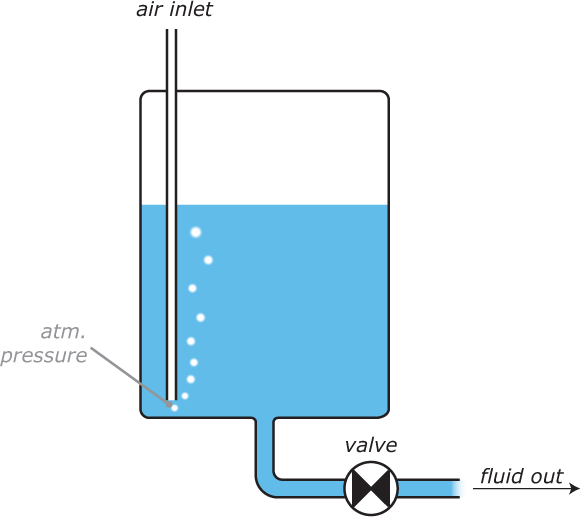 Through that way, the hydrostatic pressure at the outlet is constant as long as the fluid level is above the pressure inlet. As a consequence, the output flow rate is now constant and independent of the liquid level in the tank.

What now if we force air into the inlet tubing by using some OTC air compressor? Air pumps for aquarium are cheap and reliable but you way also use air compressor for tires etc. By forcing air into the tank we increase the pressure above the atmospheric level and we have to add this into account in our flow rate formula by adding a new term dP which is the pressure difference with the atmosphere. Recalling the complete equation, pressure sources should equate the pressure sinks, that is the pressure difference of the compressor plus the hydrostatic pressure should equates the friction term plus the kinetic pressure. After some re-arrangements, we find:

With h the height between the fluid output and the air inlet tube end. The more we increase the air pressure dP, the more fluid is forced out of the tank.

However, one tricky thing will happen with our valve. To understand this we may take aside some note on how OTC air compressors works. Again, different technologies exist but they achieve about the same mechanism: a small piston element takes a volume of air from the atmosphere and push it with some force to the compressor output. Because all the air mass inside the piston needs to get out, the pressure will increase such that all the air gets out. When we make an obstruction with, say, a valve, the air will accumulate and the pressure will increase until the air compressor motor or piston element is no longer able to withstand the accumulated pressure. It is an extremely bad idea to operate an air compressor that way because it may ultimately result in dramatic failure. You don't want to buy a new compressor every two weeks, right? The exactly same phenomenon takes place in our fluid tank. The air compressor force air into the tank such that it accumulates and make the pressure increase. But as the fluid cannot get out of the tank as fast as we are putting air into it, the tank pressure saturates at the maximum operational pressure of the compressor which is clearly not ideal.

Hopefully, there exists a solution to this problem that has even more benefits than just saving your compressor lifetime. We will take the valve off and put it as a derivation from the tank air inlet to the atmosphere: 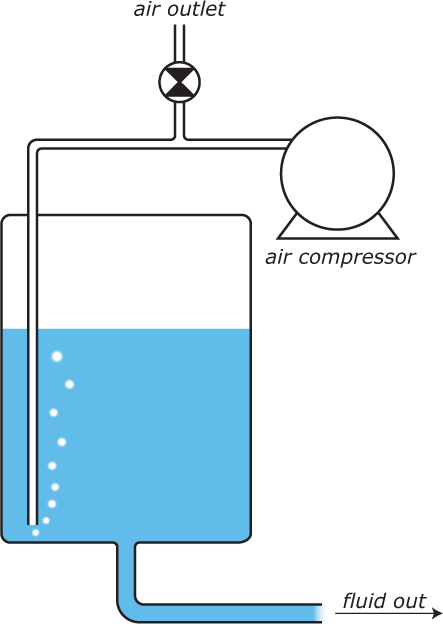 All we have discussed above about liquids also work with air (gases are fluids which just have larger compressibility than liquids). There is an accumulated air pressure inside the tubing that only wants one thing: get free to the atmosphere. But on its path there is our valve element which causes friction and so a pressure drop. At some point, we achieve a steady state such that any air molecule forced into the tubing by the compressor will result in a small accumulation of pressure that is immediately freed by the valve into the atmosphere. When the pressure get below that threshold, less air molecules go out and pressure accumulates again. On the contrary, when the pressure get above the threshold, the force that acts on air molecules is larger and more of them are able to escape by the valve. The good news is that we can change the friction of the valve by turning its adjustment screw. Tuning the friction will change the pressure inside the tubing and, as a consequence, the pressure at the bottom of the tank and the output flow rate.

Our compressor lifetime is now safe and, nonetheless, we have moved the valve to a part of the circuit that is not in contact with the liquid which might be corrosive for the valve material (think of acids, solvents etc.).