If you feel a bit lost with this definition, you can always fall down to a single thin-lens of focal length f with EFFL=BFL=FFL=f. Although most of the time you will do these derivations with a single thin-lens, I will keep it generic here to show that it can be implemented with any systems.

Let’s have a look on what happens when you put an air-gap of length BFL after the lens system M. This corresponds to

We can do the same with an air-gap of distance FFL placed before the lens system:

And we can do both as well

What is interesting with these systems is that they bring some zeros into the matrices. Zeros are convenient because they simplify the behaviour of systems.

We can infer two important rules from the expression of (y’,u’):

2/ Any ray parallel to the optical axis (u=0) output will originate on axis (y’=0) and have a slope proportional to its initial height.

Some refractometers are based on the first property but you can do much more. For instance, the angular intensity distribution generated by light scattering of a small particle is size-dependent (see [∞] Mie scattering). By projecting the scattered light on a camera sensor using system M3 you can visualize the angular distribution and determine the average particle size in your sample.

Rule #1 is interesting because if the input of the system corresponds to a pupil location (see [»] part 3 for a discussion on aperture stop and pupils), we know that all chief rays will pass by coordinate y=0 (by definition of what a chief ray is).

Figure 1 illustrates this for a single thin-lens with the aperture stop placed at the FFL distance of the lens. See how all chief rays exit with u’=0.

Notice how all fields (red, green and blue bundles of rays) strike the image plane identically with an average angle of zero. This condition occurs as soon as the aperture stop or a pupil is located at the FFL distance of a lens system. It is called a telecentric system.

Telecentric systems are widely used in optics. They offer homogeneous illumination independent on the field position and they have orthographic projections meaning that the magnification does not dependant on the depth of the sample. They are widely used in optical metrology instrument but also became some sort of standard for DSLR cameras because the camera sensor behaves better when the rays strike them perpendicular. Edmunds optics has a nice [∞] webpage on telecentric lenses that you can check. I personally work with telecentric lenses every single day at the office!

Now, let’s check what happens when we put two systems like M3 with effective focal lengths EFFL1 and EFFL2 back-to-back:

We see that heights are magnified by K and slopes are magnified by 1/K. Note that the system also inverts the sign of both the ray height and slopes if the effective focal lengths are of the same sign. If you would like to have non-inverting system, you can either use two inverting systems or one system with both a positive and a negative focal length. In this last scenario, it is not possible to use a physical aperture between the two sub-systems however.

The system described by matrix M is known as a 4f system. The name originates from using two lenses of focal length f, each surrounded by air gap of f in both direction; the total length of such system being then 4*f. You don’t have to use the same focal lengths to call such system a 4f system however.

Figure 2 shows a simple 4f system with a threefold magnification. Note that here I’m using single thin-lenses but in practice you will use many more lenses to overcome aberrations.

The system described by matrix M has however an odd behaviour: its C terms equals to zero which means it does not have an EFFL, or, more precisely, it would have an infinite one. By consequence, it does not have a back nor front focal length either even though its A and D terms are non-zero (recall that BFL=-A/C and FFL=-D/C from our former [»] derivations). Because it has no focal lengths, it cannot be represented by our generic definition introduced before and belongs to a different class of systems: afocal systems.

The 4f system is not the only afocal system that exists. For instance, if you put the system M2 after the system M1 you obtain 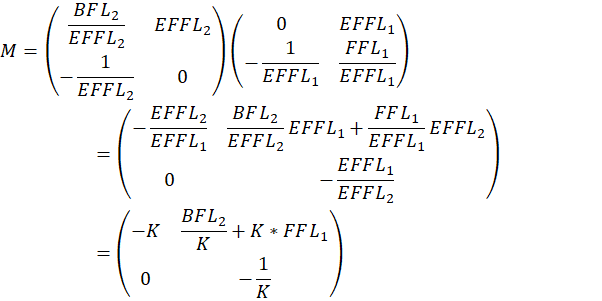 If we send rays through this system, they exit as

Figure 3 illustrates a Galilean vs Keplerian telescope with the same focal lengths of the sub-systems (here simple thin-lenses).

Finally, it is worth noting that telescopes systems do not generally include an aperture stop like the 4f systems or the clear aperture the lenses makes the aperture stop. This is very common in mirror-based telescopes where the larger mirror (called primary mirror) defines the stop of the system. Most of the time, the telescope is part of a more complex system that will define the stop position.

One of the consequences of all the development that we have derived here is the conclusion that system of thin-lenses as described by their equivalent focal length, back and front focals are only a part of optical systems and that there exist other systems that have to be described differently, such as what we have obtained here with our afocal systems (generic, pure magnifier, inverting or non-inverting). This is an important concept to consider for the #DevOptical methodology that we are building. We have also introduced the very important notion of telecentric systems, that we will use many times in the following posts.

In the next post, we will use an afocal system to make our [»] air-spaced doublet system more robust to positioning tolerances!

I would like to give a big thanks to James, Daniel, Naif, Lilith, Ian, Cam, Samuel, Themulticaster and Sivaraman who have supported this post through [∞] Patreon. I also take the occasion to invite you to donate through Patreon, even as little as $1. I cannot stress it more, you can really help me to post more content and make more experiments!

Copyright The Pulsar (C) 2005-2022. All content of this website, including text, images, formula, and files are the property of The Pulsar unless otherwise explicitely noted. You are allowed to print, distribute page address and display the content. All other usages are prohibited. Some of the experiences and ideas presented here may be dangerous and might result in injuries even when operated accordingly to the author description. We cannot be held responsible for injuries, damage caused to third parties, uses and misuses resulting from applications of the content provided here.