« Previous Entry: Choosing the Best Camera Sensor for... Next Entry: Resolution in Spectroscopy »

I recently came up with an intriguing formula that predicts the RMS spot radius of any Thorlabs doublet achromat when the stop is placed close to the lens. The formula is

The model has a median error of 1.9 µm when tested on all the available achromats together for aberrations up to one hundred time the diffraction limit of each lens. The cumulative error is shown in Figure 1.

If you would like to even further simplify the formula and accept and median error of 3.1 µm you can keep only

I will now detail how I came up with such an extraordinary empirical formula.

Aberrations theory states that aberrations can grow up according to two major factors: pupil size and field of view. The former being usually designated by ‘y’ and the latter by ‘h’. For instance, field curvature will grow as yh² which means that if you double your aperture size and divide by two your field angle, the aberration is expected to grow as 2*0.5² which is 0.5 (that is, field curvature will be twice as small). Other aberration types have different formula but they are all functions of y and h. Please note also that these aberrations depend on the optical system and not of the lens only, so changing the stop position will affect the aberrations too.

From that observation, we can therefore build a generic model of the form

of order ‘N’, which means that the sum of the power terms i+j will be always smaller than or equal to N. The pi,j are the coefficients of the model.

With N=3 we generate the model

Also, because we prefer talking in terms of numerical aperture and not of pupil diameter, we can substitute by definition

To find the coefficients pi,j, it was necessary to populate enough data to feed into the model to find a proper regression. I have then generated RMS spot radii of all Thorlabs achromat lenses by varying the NA between 0 and 0.2 and the FOV between 0 and 30° using an optical design software. I generated 128×128 points for each lens and pruned any RMS spot size that was larger than one hundred time the diffraction limit. I did this because I am not interested in strongly aberrated systems and I don’t care if I make error in estimating those as they will be crappy anyway.

We could technically stop there because Figure 2 already gives you an approximation of the amount of aberrations for a given NA/FOV pair. However, it is not suited to quick automated calculations in Excel or the like and we would like to see if we can find a more compact way to represent Figure 2 behaviour.

When we apply the regression of the N=3 model describes previously on each lens, we obtain the following coefficients: 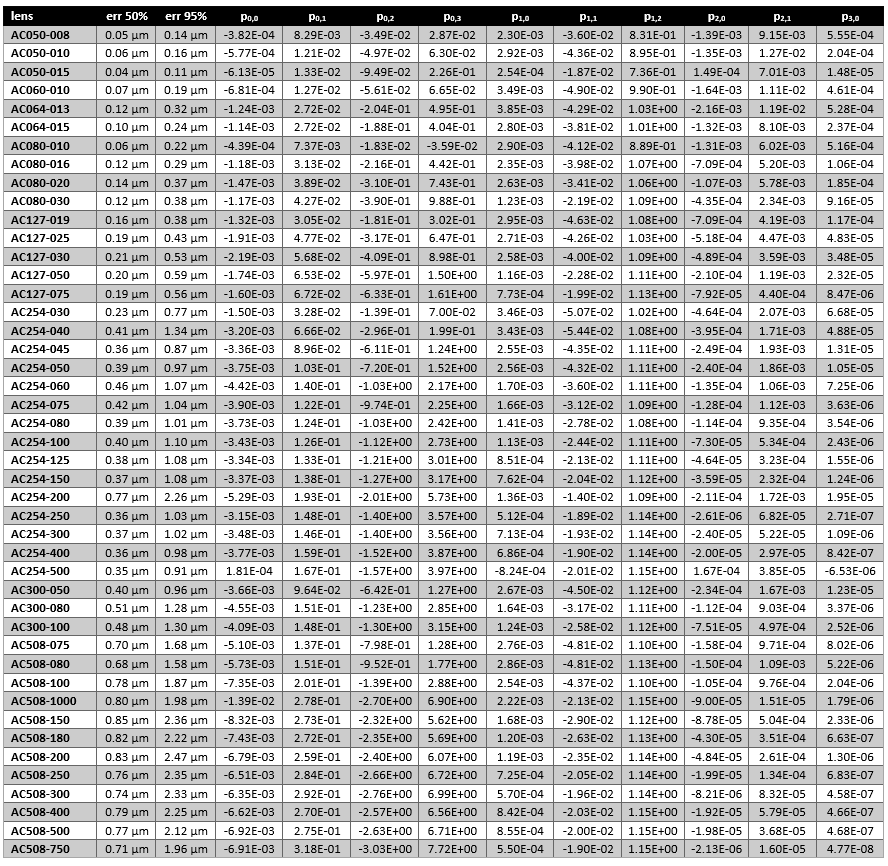 From the table, you can see that the model correctly estimates the rms spot size of each lens quite well with errors clearly bounded below 3 µm. We could already use that model in place of the data sets like Figure 2 but it is still not as compact as we would like because we still have one model with a lot of coefficients for each lens.

The question is then: can we find a simple model that describes all (or most of) the lenses?

We could try to take the mean or median values of each parameter across the table but it would not generate a satisfactory model. That is what I actually tried in a first place.

This does not succeed because each individual model is probably over-fitted due to the large number of degrees of freedom that we have. One smart thing to do in these cases is to actually simplify the model by removing some functions in the basis. Unfortunately, we cannot just prune the table above because the basis of the model are not orthogonal. Pruning one column is therefore likely to affect one or more other columns.

To figure out what would be the best model, I have generated sub-models by systematically activating and deactivating certain functions in the model set. With 10 functions, that yield a total of 210-1=1023 sub-models. Added to the original, full model, that yields 1024 models to try out.

For each sub-model I fitted each lens to find the pi,j values. At the end, we then have a set of <pi,j> values from which I pruned the outliers as defined by the Tukey fences. I finally took the median of each reminding values in the set as the overall pi,j value. I have then computed the fitting error on all lenses using the overall simplified model and regrouped the results by complexity of the sub-model basis using the number of functions in the basis.

I obtained the following results:

The best model has 6 functions in the basis and a median error of 1.442 µm but we can see that there is not much improvement by using more than 4 functions. I therefore decided to keep this last model which yields the results given at the top of the post:

Substituting y and h we get

with a median error of less than 1.5 µm on almost all of Thorlabs Achromat. By including the outliers, the median error grows to 1.9 µm. Interestingly, the simplest model (#1) seems to be unaffected by the inclusion of the outliers. So you can use the first model for quick hand calculation and still come up with something pretty close to the reality.

You can then use such a model in your spreadsheet when trying to evaluate what makes sense and what does not. Once you have a rough idea on what you want to do, you can do the fine adjustment in your favourite optical design software by tuning the numerical aperture a little bit. For instance, it is possible to roughly estimate your system FWHM including diffractive effects when designing a spectrometer:

and do the final adjustments by tuning a little bit the NA. This is however a completely different topic that I cannot address in this post…

[»] Building a Microscope from Camera Lenses

Copyright The Pulsar (C) 2005-2020. All content of this website, including text, images, formula, and files are the property of The Pulsar unless otherwise explicitely noted. You are allowed to print, distribute page address and display the content. All other usages are prohibited. Some of the experiences and ideas presented here may be dangerous and might result in injuries even when operated accordingly to the author description. We cannot be held responsible for injuries, damage caused to third parties, uses and misuses resulting from applications of the content provided here.