Although I initially planned to discuss about focusing systems derived of telescopes, I finally decided to jump directly into the conversion of thin-lenses to real-lenses to progress into the concepts that we are deriving in the #DevOptical series.

In the [»] first post of the series I presented simple spherical lenses and showed how they could be simplified as either thick or thin elements. Further posts then discussed how systems can be designed by a proper assembly of thin-lenses, thicknesses and pupils. In particular, [»] part #5 discussed a generic approach to replace thin-lenses by more complex systems. Here, we will discuss how we can replace thin-lenses by real ones such as to produce a manufacturable optical system.

A spherical lens can be described by four important properties: the radii of curvatures of both of its spherical surfaces, R1 and R2, its center thickness T and the glass refractive index it is made of, n. Other parameters exist, such as surface quality, centering of the surface, tolerances etc. but they apply on manufacturing aspects rather than on design aspects. We will come to manufacturing constraints in a later post.

Thick-lens, under the paraxial approximation, can be represented as two refractive surfaces called the principal planes of the lenses (check [»] part #1 for a recap) and separated by a distance T.

This system is no exception to our formal description developed in [»] part #2 and has an effective focal length, a back focal length and a front focal length: 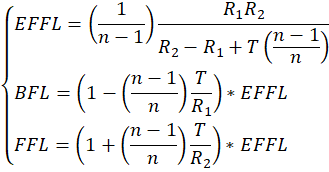 The formula for EFFL should be familiar because it is the lensmaker formula:

If you are wondering what are the two outer matrices in the computation of M, they are the refraction matrices going from an index n1 to an index n2:

Using the derivations of [»] part #5 we can therefore convert a thin-lenses into a thick one. However, we now have four parameters (two radii of curvatures, one thickness and a glass index of refraction) where we previously had only one, the effective focal length. We therefore need a procedure to set the different parameters.

We will assume that the glass selection has already been dealt with. I will discuss glass selection in a later post, but let’s assume at this time that it is already fixed. Distance T will be related to the glass thickness so we want it to be as small as possible to reduce cost but thick enough so that the lens does not break. We will postulate some starting value and refine it later if necessary, for instance T=D/20 where D is the diameter of the lens which is obtained from the raytracing. I will also come back on lens diameter evaluation in a later post but assumes for the moment we know the required diameter for the lens.

Remains two parameters, R1 and R2, which can take an infinite number of values to produce the desired focal length.

If we set one, we obtain the other from the parameters T, n and f (focal-length of the thin-lens to replace). For instance with R2 we obtain:

In practice however there is one solution that will often be optimal for the system as it will minimize aberrations and we should therefore look for that one.

where X is the partition factor

and u’ and u the angles of the paraxial marginal ray after and before the equivalent thin-lens, respectively.

The formula has three important cases that we will often apply with stock lenses:

|u’|<<|u|. The rays exit almost collimated. In this case X≈-1 (neglecting the effect of the refractive index) and we should use a planoconvex lens with the plane side away from the collimated rays (R1=∞).

|u’|>>|u|. The rays enter almost collimated. In this case X≈+1 and we should use a planoconvex lens with the plane side away from the collimated rays (R2=∞).

Every optical engineers should know these rules, even if they do not master the mathematical details of their origin. In fact, this is a question that is systematically asked to job applicants where I work and you would be surprised that some people claiming to be senior optical designer would fail that test.

That was for stock lenses where we do not have a lot of geometry to play with as catalogs mostly proposes planoconvex and equibiconvex lens but rather few meniscus and best form lenses. Since we are designing custom lenses, let’s develop a formula to find R1 and R2 based on X and f.

We will first express R2 as a function of X and R1 (we could have done the inverse and start with X and R2):

Note that when X=±1 we already have the solution because it is a planoconvex lens.

We will now inject this into our former derivations and solve for R1:

Being a second degree equation, it has two roots which are

And we obtain the corresponding value for R2 using

Recall that when X=-1 we have a planoconvex lens

And when X=+1 we also have a planoconvex lens

Now that we have an expression for R1 and R2 based on a given thickness T, material index of refraction n and partition X, we can replace our thick-lenses by real-lenses.

Let us now discuss how to select a proper T value.

It corresponds, as its name suggests, to the thickness of the glass at its edges.

In terms of manufacturability, it is important to maintain both T and E above some critical values (typically 1 mm). A procedure could be to identify by how much to modify T such as to reach the condition min(T,E)=1 mm. Since the values of R1 and R2 will slightly depends on T, the algorithm should be applied iteratively until it converges within some defined threshold (e.g. 1 µm).

When [»] replacing the thin-lens by the thick one, we have to subtract two quantities L1 and L2 which are given by EFFL – FFL and EFFL – BFL. Using the formula of the thick-lens derived earlier in this post, we obtain two distances which correspond to the position of the principal planes h1 and h2 as defined in [»] part#1. You should not care too much about this and just use the formalism we derived previously on how to replace thin-lenses by other lens systems.

It’s now time to use all our derivations on a practical scenario!

I have designed a telecentric long-working distance objective based on a telescope system using thin-lenses for which I computed the real lenses parameters using all the formula we derived in this post. This is actually derived from a case I met during business hours not so long ago but that was solved differently using more traditional optical design methodology. I must say I could have gained so much time back then if I had the equations we are talking about today!

The paraxial lens system is shown in Figure 1 and consists of 4 thin-lenses. It was designed for an equivalent focal length of 131.25 mm, a projection distance of 300 mm, a numerical aperture of 0.02 and a field of slightly more than ±1° (6 mm image disk). Furthermore, the design is telecentric such that rays reach the image plane perpendicularly for all field position. Since the design is rather compact compared to the 300 mm back-focal distance, I cropped Figure 1 to the lenses system region only and do not show the image plane.

A real-lenses system was computed based on the prescription data of the thin-lenses and is shown in Figure 2. All the lenses are singlet lenses made of N-BK7 and have a minimum edge thickness and center thickness of 1 mm for manufacturability purposes.

This design was imported in ZEMAX OpticStudio which confirmed the prescription data of the thin-lenses system. Only a minor difference in the effective focal length was observed with 131.26 mm reported by ZEMAX instead of 131.25 mm (less than 0.01% difference).

The design was confirmed to be telecentric, as can be seen in Figure 3. The mean angle (chief ray) is zero for all field positions.

A spot diagram in Figure 4 shows that the system should be very close to diffraction-limit. The complexity of the system of Figure 1 is therefore justified in relation to its prescriptions (STOP size and maximum field). The system is actually limited here by spherical aberration in the negative element on the left hand-side of Figure 2. If we had to increase the size of the field or STOP we should split this lens into two or more to keep diffraction-limited performances.

The quality of the system is furthermore confirmed by the MTF as shown in Figure 5. Details down to 20-25 µm should be visible on the full projection area (6 mm image disk).

Although the system shown here is relatively simple (monochromatic, low-NA design) and that no tolerance or manufacturability analysis was performed, it confirms that optical designs can be successfully generated based on autonomous computations of an expert system. In the following posts, we will try to improve the system in terms of achromaticity, tolerancing and manufacturability. We will also investigate together how a base design can be automatically refined (or simplified) to achieve a specific image quality. Nonetheless, we already achieved a very important step today as we were able to prove that the methodology followed by the #DevOptical series of post is perfectly working with real applications and that it can save a lot of time in the design process.

As an example, using just one click in the Matlab program to restrict X to be either -1, 0 or +1 we can restrict the design to stock elements (provided individual focal lengths can be found as stock), such as shown in Figure 6. This can dramatically reduce the cost of the system since every custom lens that needs to be manufactured as a NRE tooling cost associated. Typical price of all the lenses of Figure 2 (for a single system) is about 400€ + 1,200€ tooling cost whereas the system of Figure 6 could be typically obtained for less than 250€. Production costs of higher quantities of the custom system will usually drop very fast and it is not uncommon to pay almost the same price for 1, 5 or 10 systems!

I would like to give a big thanks to James, Daniel, Naif, Lilith, Cam, Samuel, Themulticaster, Sivaraman, Vaclav and Arif who have supported this post through [∞] Patreon. I also take the occasion to invite you to donate through Patreon, even as little as $1. I cannot stress it more, you can really help me to post more content and make more experiments!

[»] #DevOptical Part 1: The Real, the Thin and the Thick Lenses