Today we continue our journey into the exciting world of [»] third-order aberration theory by deriving the extremely important set of stop-shift equations.

The stop-shift equations allow computing the seidel aberration of a surface when moving the stop in the system using their values at the former stop position. I must confess that, when I was first exposed to them, back in 2017, I completely disregarded their usage thinking that I would not need them because I had the computational power to directly access the seidel terms everytime I updated the system. I was wrong, terribly wrong! The stop-shift equations play a central role in optical system design and are mandatory to understand the origin of aberrations in a system and how we can tailor the system to minimize or even cancel them!

Now that I have all your attention, we can start digging into some maths :)

In my previous post, I introduced the Seidel aberration contribution of a surface as 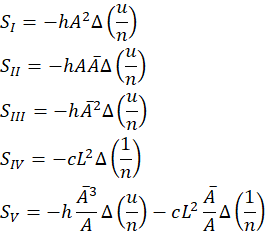 where (h,u) refers to the marginal ray and (h,u) to the chief ray.

represents the change of x as it goes through the interface. 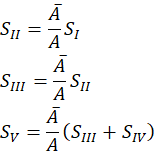 Since S1 does not depend on the chief ray (h,u) we have

The added coma due to the change in chief ray is

Knowing that, from the Lagrange invariant, we have

we have the relation

with Q the eccentricity factor

This means that, knowing the seidel coma of the surface at some chief ray (h0,u0), we can compute its value for another chief ray position (h1,u1) using the eccentricity factor as

Let’s analyze a bit what is going on exactly in Figure 1. You can see a lens in black and a STOP that is moved from the lens to some other position in front of the lens. The initial chief ray, in purple, crosses the optical axis at the lens, so h0=0. This is because of the definition of what a chief ray is. By moving the STOP, we get the green chief ray which intercept the optical axis at the STOP position (again, by definition), and now intercept the lens at some higher position h1. You can obtain the value of Q by using the here-above formula. In Figure 1, since the marginal ray intercept the lens at about the same height as the new chief ray and the initial chief ray intercept height is zero, we get Q≈1.

We can derive similar equations for all the Seidel aberrations:

where the starred values are those after the stop-shift.

It is frequent to apply the stop-shift equations to an initial situation where the stop is located at the element in which case h0=0 but this is by no mean compulsory.

So why are the stop-shit equations so important in optical design? This is because they allow predicting the aberration of a system as you move the stop. For example, it allows to state that if an interface has spherical aberration, there will always be a position of the stop that will cancel coma:

which will occur when

At contrario, we know that it is impossible to correct the coma of a system by moving the stop if the interface has no spherical aberration.

Once you have identified the eccentricity value you would like to achieve, you can compute the amount of shift of the stop to apply knowing h0, u0 and u1 (or indirectly via L).

Similarly, an interface that does not have coma nor spherical cannot be corrected for astigmatism by moving the stop.

Distortion is affected by all other aberration types but it can be neglected as it only produce a shift in the metric of the image but does not impair image quality and can even eventually be corrected by software after image acquisition.

Only spherical and Petzval can never be corrected by shifting the stop. There are however other methods to handle them but this goes beyond of the scope of this post!

In a future post, I will show how it is possible to produce an acomatic (S2=0), anastigmat (S3=0), system using only a singlet lens by controlling its shape and stop position. All that made possible by the stop-shift equations! Can you already spot how I intend to achieve that?

I would like to give a big thanks to Young, Samuel, Arif, Mehmet, James , Lilith, Vaclav, Hitesh, Jesse, Sivaraman, Jon, Themulticaster, Sebastian, Eric, Cory, Karel, Alex, Kewei, and Marcel who have supported this post through [∞] Patreon. I also take the occasion to invite you to donate through Patreon, even as little as $1. I cannot stress it more, you can really help me to post more content and make more experiments!

Copyright The Pulsar (C) 2005-2023. All content of this website, including text, images, formula, and files are the property of The Pulsar unless otherwise explicitely noted. You are allowed to print, distribute page address and display the content. All other usages are prohibited. Some of the experiences and ideas presented here may be dangerous and might result in injuries even when operated accordingly to the author description. We cannot be held responsible for injuries, damage caused to third parties, uses and misuses resulting from applications of the content provided here.